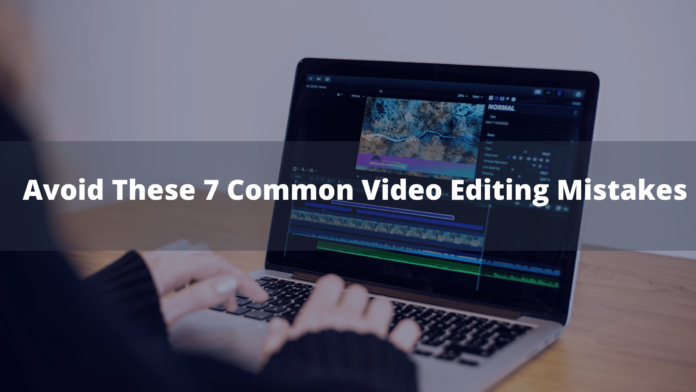 Creating a video is an art, but it can be intimidating to think of the numerous mistakes that you could make while creating content. This is where a video editor comes to the rescue to help you create a flawless and natural video sequence.

Video editing is not just confined to removing unwanted stuff; rather, it extends to adding text, graphics, effects, and sounds. Many mistakes can come in your way during this process, but if you have the right knowledge, you can avoid making these, and then nothing can stop you from producing desired outcomes.

Through this post, we will introduce you to the best practices to avoid some common video editing mistakes while using a video editor.

Voice, music, and clip are the three audio components you see on your timeline; you can turn any of these components off if you don’t need them. At times, the sound of the editor’s music track might overpower other tracks.

Though it is good to have background music, it should not interfere with other sound effects and dialogues. Also, remember to choose the sound effects that compliment your video theme and do not distract the viewers.

The majority of video editors come with an audio control feature; adjust the audio to the extent that it blends well with the other effects and does not overpower or distract from the main video. Doing so will avoid post-production issues.

Editing is an imperative part of the screenplays; therefore it works on place and time. A tried and tested editing technique, the jump cut, helps achieve the best editing results by collapsing time. Jump cuts are used when some scene has to be pushed ahead to save time.

For example, if there is a scene with lots of action, using this feature will increase the scene’s pace to move the story forward. This technique is also useful when you have taken just one shot and want to cut time out of the frame to make the character appear to move to a different position in the same shot.

To resolve this, simply extend the previous clip by adjusting the transition time. However, make sure that the transitions blend well with the whole video.

No one likes to watch out-of-sync videos; this is one of the worst mistakes that break the engagement of the viewers. A video is out of sync when the music is faster than the footage or vice versa.

While you move your clip around the timeline, you can move things in and out of sync. When this happens, the software is likely to prompt; however, you will only have to watch out whether the clip is in sync or not.

When you edit the video, ensure that the scenes are mapped so that the sound of the music fits with your scenes. Besides, if there is a problem with the frame rate, look for the point where the issue is occurring, followed by splitting and realigning the audio accordingly.

The main purpose of using graphics is to add appeal and value to your videos. However, it is essential to ensure that the graphics are not distracting and used only when required. Using fewer graphics and refining them to a few fonts that can work well with them makes for a smart choice. Also, avoid using different fonts and colors for texts and styles, and try to maintain consistency.

No one expects you to be a graphic designer, but you can watch some online tutorials to better understand how to use effects, animations, and graphics. Many video editors provide demos and tutorials on these features. Also, consider sticking to a single color and font throughout the video, and change only when you need to highlight something or make an important point.

Sometimes while using screen recordings, you may end up mistakenly capturing some personal information that you don’t want viewers to see. If something happens like this, do not worry, as some video editors allow you to blur that specific area to conceal or hide the unwanted details.

The blur tool in any video editor lets you conceal the information and can be used to attract the viewers towards specific things in the video. Therefore, be sure of what you want to hide or highlight and use this feature wisely.

Another common mistake made while creating a video is leaving too much room. For example, you are making a video while sitting down, and when you watch your video after recording, you realize that there is too much space over the head in the frame. Therefore, you must know how much vacant space there will be around the subject before you begin recording.

Creating engaging videos is no longer a challenge if you have the right knowledge, a clear vision, a reliable editor, and the knowledge to avoid the most common video editing mistakes. We hope the above-given tips will help you create attractive and professional quality videos efficiently and seamlessly.