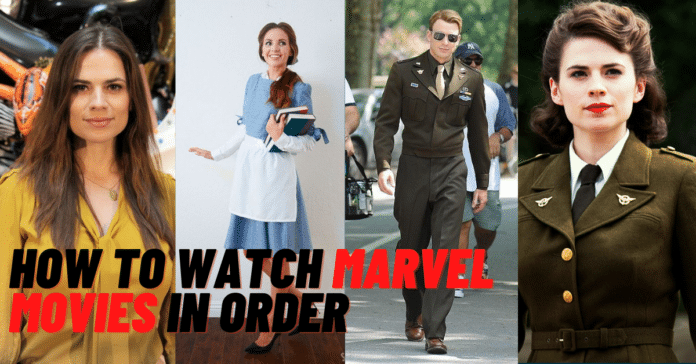 Ever since the rollout of the first Iron man in 2008, the Marvel Comic Universe (MCU) has captivated a vast audience all across the world and now is one of the most trending franchises of all time. Those early fans watching the movies since the initial Iron Man movie have had a joyride. However, watching marvel movies in order with the same accuracy is not exactly a piece of cake for newcomers. To date, 23 MCU movies are released, and almost all of them are intertwined. The astounding $22 billion MCU has made through these movies, which further adds to the importance of watching these masterpieces in the right order.

They take place in the same universe, with the same characters, with almost all of them having uncanny connections with each other. With more movies expected to arrive in the coming years, having sound knowledge of all the movies that have been released until now and their stories in the sequence is necessary if you want to have this universe’s full experience.

When it comes to watching these movies in order, simply watching them by their release date doesn’t cut it. Marvel does not exactly follow a chronological order; for example, Captain Marvel was released in 2008, but the storyline it follows was set way before 2008 when the first marvel movie was yet to be released into the world. And if you intend to delve into the MCU now without sound knowledge, things can get pretty complicated pretty fast and may end up making your experience sour for you. But with a little bit of caution and the right order, you can make the best out of it.

But don’t fret; we will help you get through the MCU universe with perfect accuracy is all that this guide is about. Below are the lists that will help you decide the best route through the marvel movies and binge away. Plus, Disney plus has the full catalog of films on the platform to make it easier for you to work through this on your binge journey.

All the Marvel movies in order

If you are a newcomer to Marvel movies, you have to, first of all, understand a few things. The first one is that the order of release is not exactly by the storyline. The MCU released the movies in the form of phases. With each phase containing a set of specific movies to put out to the world. By 2020, three phases have been completed so far, with a total count of 23 movies. The phases work pretty merely, in which the phase starts with the introductory movies about the characters, and as it ends, the story of that phase also wraps up. However, this does not mean that as a phase ends, their character’s importance does too. All the characters are often found playing their roles in the movies of other characters as well.

Here are all the movies in a chronological order separated into the groups of their phases. In simpler terms, this is a list of movies by the order in which they were released.

The first phase began with the release of Iron Man in 2008 and ended with the Avengers Assemble in 2012. It contained a total of 6 movies.

The second phase started with Iron Man 3 in 2013 and ended with Ant-man in 2015. This phase contained a total of 6 movies.

The third phase is the longest phase of the MCU universe so far. Starting off with Captain America: Civil War in 2016 and ending with Thor: Ragnarok in 2017. It contained a total of 11 movies.

As the year 2020 comes to an end, so does phase 3 of the Marvel Comic Universe. With some movies almost developed and some in the initial phases of development, here is what we know of the MCU phase 4 of movies so far.

Phase four is expected to start rolling out in 2021 with the Black widow; however, when it ends is uncertain as it can be subjected to changes and improvements in the list. Below is what phase four is supposed to look like.

However, because of unforeseen circumstances due to the pandemic, it is possible that some of these movies could be changed, or the arrangement can be shuffled according to what the directors decide.

Marvel movies in order of the story

Now, as we are done with the marvel movies in order, let’s dive into how these movies relate to one another. Even though some of these movies were released later, they actually take place earlier in the Marvel Comic Universe. This list is best for MCU veterans that are looking for a new way to watch. This list might seem a lot more complicated than the list shown above, but fortunately, marvel has also revealed the years in which these movies took place. With the exception of phase 4, whose movies have not been released yet, this list will take care of the first three phases of MCU and the order in which their stories have been connected.

Watching the Marvel movies in this list will help you go through the movies in the order the events took place in the marvel universe. For those that are just starting to step into the Marvel Universe, this list is better, to begin with, to get the best context of the story step by step.

Although, not all Marvel movies have received the same recognition, with some being top of the line while others somehow didn’t make their mark and the others. With a widespread belief that Civil war, infinity war, and avengers are the winners for us, it is better to let the people decide. Surprisingly, there is a tie between Avengers end game and infinity war for the best Marvel comic universe movies of all time. This list does not mean that the movies on the top have to be the best and those on the worse end of the spectrum are somehow unwatchable. It is just the opinions of how people found them to be. This list is compiled from the ratings people have given these movies based on IMDB ratings from the best to the worst.

Fortunately, Disney Plus has made it easier to watch the MCU movies in order. You can also save the copes offline on your portable devices to watch them later in your spare time. As long as you are subscribed to the service, you can watch and download unlimited movies on Disney plus.

For the offline downloads, around 400MB storage space is required for one hour of content. However, if you aim for high quality (preferable), the storage will go up to 50% more. Disney plus maybe the best platform to watch the Marvel movies in order, but it does come with its perks. Not all movies are available on Disney plus.

These are the MCU films that are available on Disney Plus.

These are the list of movies not available on Disney Plus.

These movies are soon set to arrive on Disney, plus Thor Ragnarok being the first to be uploaded. However, as for the Spider-man and Incredible Hulk movies, they rarely ever join the movies on Disney Plus. So, it’s better to use other services instead of waiting for the list to complete on Disney Plus.

As for the movies that are not available yet on Disney Plus, you can use other platforms to your advantage. You can also stream, rent, or download the movies on Hulu or Amazon, where all of these films are ordered by their release dates.

The lists mentioned above will help you see the marvel movies in order and also the best route to travel through the Marvel Comic Universe. If you are starting, you should go with the storyline, following the list of movies mentioned in order of their story. However, if you are a veteran, you can scoop off the top movies from the best MCU movies rated by the audience. Following your desirable list will make it easier for you to decide your next move so you can wholly enjoy the experience of the Marvel Comic Universe.

4 Benefits of Getting Epoxy Flooring