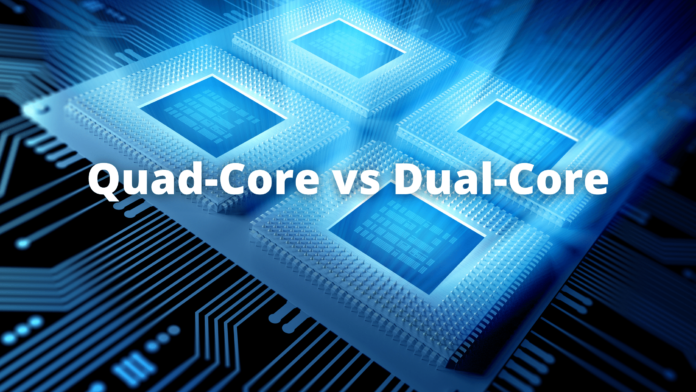 You don’t have to get confused while buying a laptop for whatever purpose because today all your queries will be resolved. You’ve reached the right post because today we’ll explain to you everything about Quad-Core and Dual-Core processors and not only this, we’ll also give you our final verdict that what we think is best from Dual core vs Quad-core processor.

What is a core?

For instance, the more brains are working to finish the task, it will probably be finished fast as compared to the task completed by just 1 brain. Cores work the same way, but only some applications work this way. Another application depends on click speed, which you can calculate in GHz

What Are Dual-Core and Quad-Core processors?

A Dual-Core processor is made up of a subset of 2 cores or processors in 1 chip. Each core works differently with the help of its own controller to process all the instructions and do the calculations at the same time.

The quad-Core processor is made up of 4 small cores in 1 processor. It works same as Dual-Core Processor, but the only difference is instead of 2 processors, in Quad Core 4 cores process all instructions and finishes task more quickly.

If we look at Quad-Core vs Dual-Core, what features differentiate them and what’s the best one for your laptop? You’ll find all the answers below.

Dual-Core vs Quad-Core: What’s the best one for your Laptop?

When it comes to choosing between Dual-Core and Quad-Core processors, power consumption differentiates both laptops as more cores will consume more power. If you’re buying a Quad-Core laptop then it will consume more power as compared to the laptop will a Dual-Core processor, though it will function faster. When a user decides to buy a laptop, he looks for an energy-efficient one.

Price is one of the main differences between both processor laptops. Quad-Core processor laptop would be more pricy than Dual Core laptops in most cases but not all the time. Different factors also affect the price including Clock speed. If the Clock speed of both laptops is the same, a computer with Quad Core will be pricier than a dual-core.

The most important difference between both processors is speed. In most cases, Quad-Core processor laptops run more efficiently and complete the task more quickly as compared to Dual-Core processor laptops because of having more cores. But this won’t always be the case if the application can’t assign the tasks to the cores. Apart from that, the Clock speed can play a vital role too when determining the speed of the computer.

Is buying laptops higher than Quad-Core worth it?

Nowadays brands are launching powerful laptops with premium prices that contain Hexa (six cores) and Octa (eight cores) processor laptops. Though this will work efficiently, and you’ll be able to do multitasking more comfortably without the worry of your laptop getting hanged or heated up. These powerful laptops won’t come at an affordable price, you might have to pay a premium amount to get these.

A question you should ask yourself before buying a laptop higher than Quad-Core is that do you really need it? If you’re just purchasing it to perform basic tasks then you don’t need such power because it won’t be utilized, whereas if you’re a professional and want to run multiple powerful software at a time and if you have enough budget then you can go for laptops with higher processors.

How To Choose The Right Power Supply For Your Laptop

A Bit About Ransomware How It Works And What It Does? And Can It Be Countered?

Is CSPM Essential for Cloud Security?